The rules for 10K Apart are (taken from their site):

Call me crazy, but for this progressive enhancement focussed competition I decided to create a canvas web app called Albus. Obviously, it doesnt make much sense to create a drawing app for something that requires an experience that works without JavaScript. However, progressive enhancement to me means you build upon the minimum viable product—the baseline—to enhance with features for the browsers that support them.

So while on most modern browsers you will be able to draw on the canvas, the actual concept is a website that generates line art from a photo.

The baseline requirement is that you must be able to put in a photo and it will return line art. The browsers that dont support canvas, or JavaScript is unavailble, will use server-side generation while other browsers will be able to use service workers and generate it locally while offline. That, in my humble opinion, is how progressive enhancement should work.

I previously made a very basic version of this as an example for my book JavaScript Creativity, I had wanted to make it for a long time. This competition was the excuse Ive been looking for to carry on and do something quite interesting with the concept. In some respects the limitations of the competition are quite freeing, because it means I cant get too carried away and there is a deadline!

Despite the obvious Wizarding World connotations (most of my side projects have codenames inspired by JK Rowling), Albus is one of the latin words for White. As white light is the sum of all wavelengths of visible light, I thought it would work well for a colouring app.

Also, it is short, so less bytes!

I started with pen and paper for this one. Partially because I wanted to write my ideas out just to figure out whether it was even possible to make a progressively enhanced colouring app. Turns out, it is. Even on the oldest of web browsers, you can use the server to generate the line art and print out the image to colour it in with pencils.

As you can see from the photo, I wrote a wish list of things such as drag and drop, a gallery, range of brushes. Below that I wrote a list of must-haves:

You will note that I wrote be usable, not for one minute did I think that every device and every browser would have the full experience. But I knew that in order for it to work well, and to fit the rules of the competition, it must be usable in all situations. Without JS, without CSS and without a connection.

I wrote range of brush types if possible, I knew that if I had loads of different ideas for brushes then it would not get finished and it would be far too large. Since I had this in mind from the beginning, I was able to write the code in such a way that new brushes can be added over time and can be lazy loaded as they dont need to be loaded before use.

I had the basics of the edge detection working with drag and drop from the example I had written for JavaScript Creativity. So I used that as the basis and refactored so that the code was small and still readable. Although the submitted version only has one brush, I knew I wanted multiple brushes to be possible. So to do that I made an interface for brushes that meant any brush would have startPath and mouseMove methods. With those, brushes can easily define their own unique styles. Lots of brushes would use an image rotating, but others could be algorithmic or just totally random.

I also needed to build the interface, I decided to use radio buttons because it meant I could use as little code as possible. To change the colour I decided to simply use an input with type=color so browsers that support it would show a colour picker and others would show a text box where you can enter the colour manually. The alternative (and original idea) is to create a colour picker, while it is easy enough to do this it seemed like a waste of valuable file size and time. The solution is ideal for creating a progressive experience in under 10KB just by using modern features and keeping it simple.

Right, so I have the client-side edge detection working nicely with drag and drop etc. So what do I do now? Ah… yes, we need server-side generation for when JS isnt available.

Well after much research, I realised it is quite awkward trying to do image processing with Node.js. Interestingly, while writing this I have just noticed that not for a second did I consider using a different server side language. At the same time, I already had a working implementation client-side. So it made sense to use that. To do so, I used PhantomJS (thanks to Aaron Gustafson for making me realise Node-Phantom automatically installs PhantomJS). This meant that I was able to create a page purely for edge detection at /edgedetect/ that I could render in Phantom and return to the client. I originally just copy and pasted the code but have since refactored it so that both HTML files use the same edge detection script. An advantage of this, other than being the right way is that in the future difference edge detection algorithms can easily be used.

The limitations for the competition are not required for server-side code but I tried to ensure everything was small anyway. My dependencies (may change) are:

On my website I am using a service worker that I stole from Jeremy Keith. Since I am not too knowledgable about service workers, I used the same one for Albus. I then modified it and cut out a lot of the code as Albus is generally not going to change content.

After first load, browsers with service workers will now not need to download anything to use Albus. It will also work offline without an issue at all, because all browsers that support service workers can do the client-side edge detection.

Everything I have written about so far is to do with design, how it will work across browsers and the structure of the code. Most people will however think of the visuals. For this project, I worked backwards. Before even thinking about how it was going to look, I needed to prove that it was even possible to make a colouring app in less than 10KB that could do the baseline of edge detection even without JS.

Turns out it is possible, so I started thinking about how it should look and feel. Albus needed to work well on all browsers. My prototype treated small screens as second-rate. So I needed to make sure it works really well on mobile and that the UI is mobile-first. When I started looking at how it should look, with all of the MUST-haves working, the first load was 5.2KB. So I had a bit of room for CSS, and could possibly lazy load icons or something like that.

The most important part of the design is to work well on mobile, so the toolbox is crucial. Instead of the photoshop-style icons on side of screen, I decided to use a modal/dialog box (using the same styling as the splash screen). This means I didnt need to have any icons, so better performance and accessibility. On mobile it now works really well. I think it works nicely on desktop too, but some people may prefer a floating toolbox… that can easily be changed in the future.

I made the decision to use a text only logo instead of a nicely designed one. Partially this is because it is quicker, but thats just an excuse as I could easily lazy load an image or SVG. On the other hand, I am useless at designing logos so went without!

Some browsers dont support canvas or even JS and CSS. So as long as the main edge detection is working, I decided that it makes sense to provide the processed image for download. That way, even in the oldest of browsers, it can be opened with software or printed.

I strongly believe that progressive enhancement benefits everyone, so instead of only showing the download for older browsers I decided to show it for everyone. Most people will use the basic colouring tools, but others now have the ability to easily create line art from a photo then open it in Photoshop if they wish.

Does it fit the rules?

I found that on a lot of the images I tried, edge detection didn't work very well. To improve the quality I changed the threshold and added a pre-processing blur (thanks to Chris Heilmann for showing me canvass native blur). I lazyload Fabien Loison's StackBlur for browsers that don't support the native blur. I thought I could use a CSS filter but turns out that doesn't show up when you use getImageData for canvas.

In my ultimate wisdom, I forgot how mobiles work. Originally I couldnt get touch working on the canvas, but eventually realised I wasnt actually looking for targetTouches. In the future this could be changed to allow multitouch.

I noticed that when the service worker adds files to the cache, it downloads the files that have already been downloaded. Jake Archibald said that this can be fixed but I haven't got around to it.

Resizing canvas is tricky business. I ran out of time before fixing a bug where the canvas would resize in strange ways. This means that the canvas painting isn't aligned with the base image.

I used a checkbox hack to create the open and close buttons for dialogs. Turns out Lynx shows these checkboxes, as there is no way to hide them without CSS or the hidden attribute. So my fix was to add them in with JS, from a template in the html. Not pretty but fixed the issue. For most projects it is probably fine to ignore it.

Another bug I haven't fixed yet is the if you draw on the canvas then drag another image, it will edge detect the brush strokes. Clearing the canvas before edge detection should fix this but didn't seem to when I tried it. 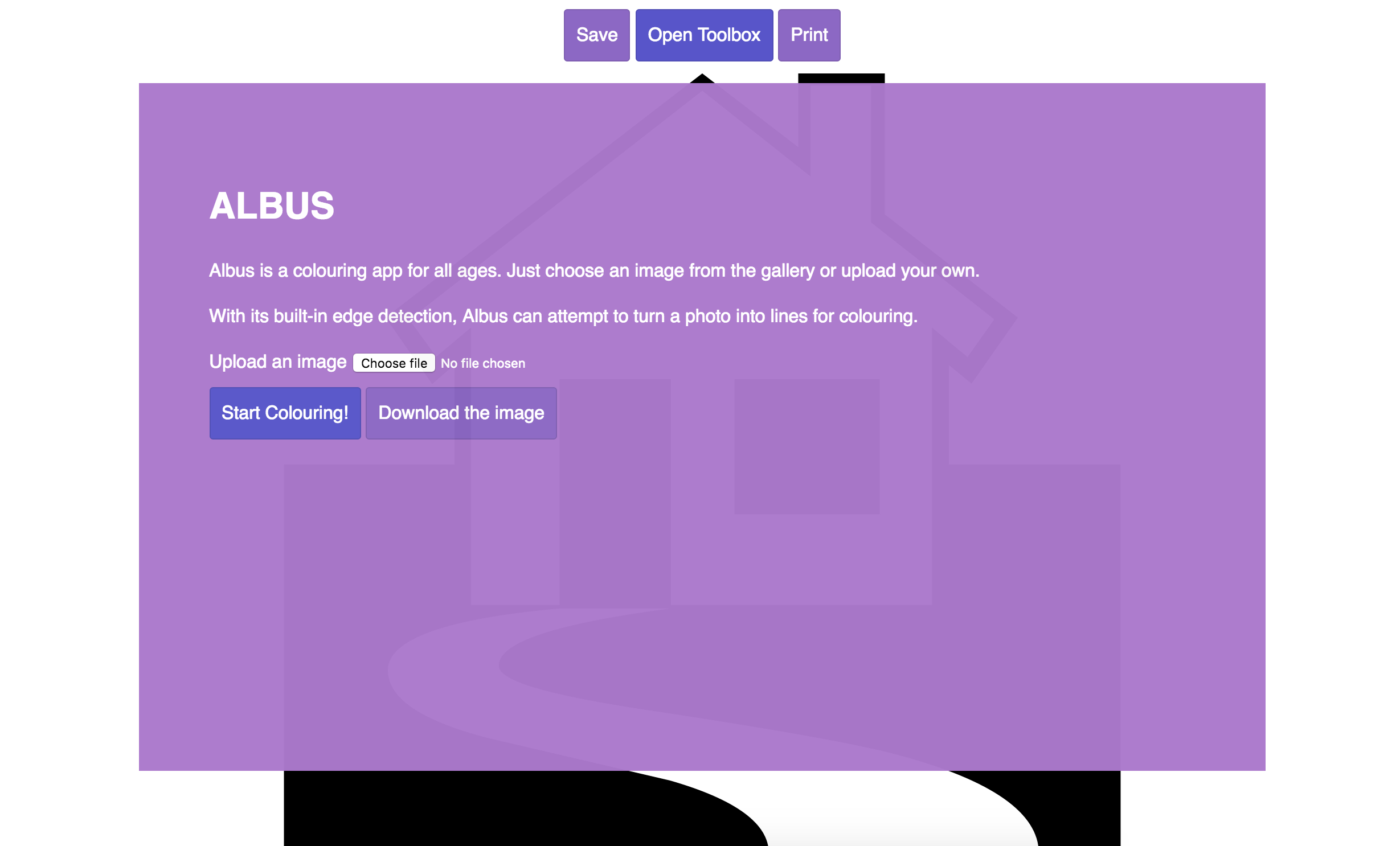 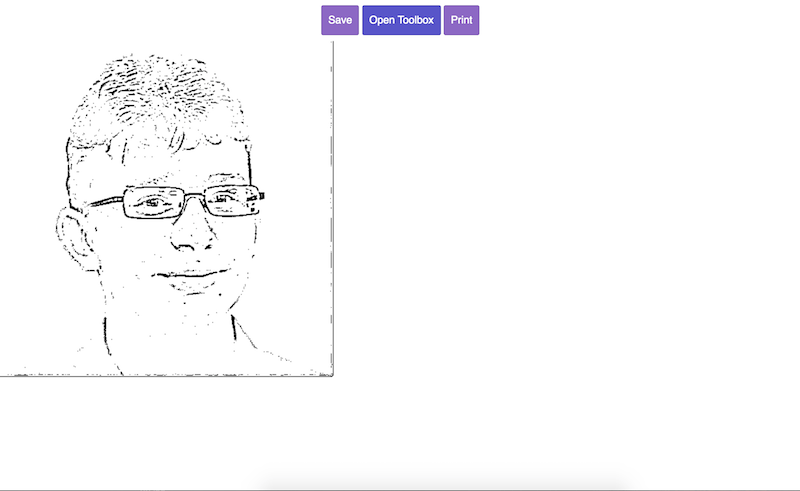 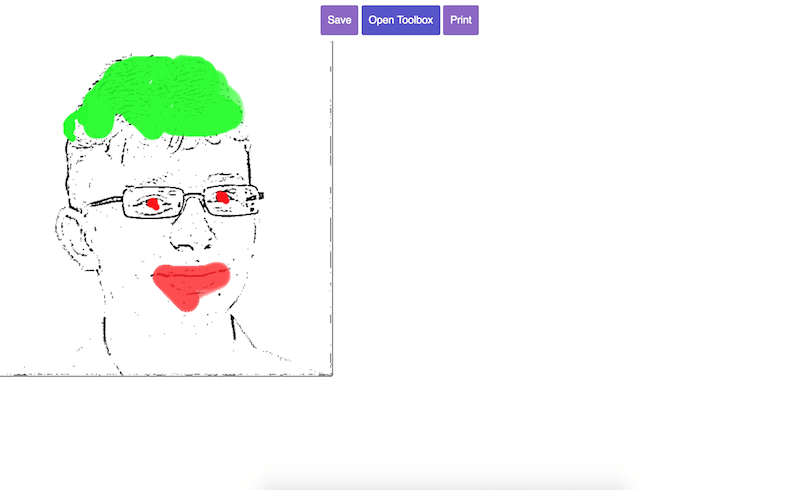